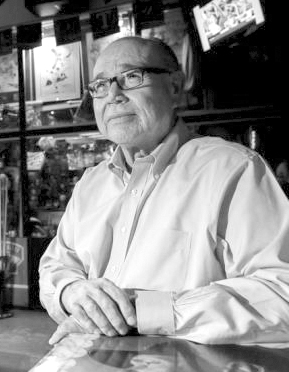 After receiving an art scholarship, Manuel Hinojosa earned his degree in Fine Arts from Pan American University. Enrolling at the University of Southern Louisiana in Lafayette, he added a degree in Architecture. Now in his 40th year of practicing Architecture, he serves as the District Architect for the Brownsville Independent School District. For his contributions to the field of architecture and cultural preservation, he was named a distinguished “Fellow” of the American Institute of Architects (FAIA) in 2009.

It is Hinojosa’s artistic abilities that have received national recognition. His paintings have not only attracted the likes of Beckett Sports magazine, who have printed various pieces including Mickey Mantle, David Robinson, Dan Marino, etc., but also created an impressive sports museum housing many of his autograph paintings collected over the last four decades. Hinojosa most renown work of art is the Tom Landry mural in Mission which was dedicated by Tom Landry in 1985. Hinojosa alongside his wife, Norma and brother Rick co-owned Doubleday’s Bar of Champions and Museum in Port Isabel. The museum exhibits the largest sports memorabilia collection in Texas.

“To Dream, Diversify and never miss an angle.” – Walt Disney

From an early age, Manuel Hinojosa dreamed of being a part of the magical Walt Disney experience. In 1964, Hinojosa booked a bus trip (as a dishwasher to afford the fare) to the New York City’s World’s Fair to witness the first installation of Disney’s “It’s a Small World.” In 1965, he entered the celebrated gates of the Magic Kingdom in Anaheim. Manuel knew then that the world of imagination was where he wanted to venture, and thus began his lifelong journey into his love of art.

Early in his childhood, Hinojosa’s parents followed the advice of his fifth-grade teacher to enroll him into private art classes. Mission’s renowned oil painter, Ann Doffing, was the chosen tutor. For the next six years she instructed Hinojosa about the tools and secrets of oil painting. Prior to his graduation from high school, he competed with other South Texas artists and was awarded a college art scholarship to Pan American College. Later receiving a Bachelors of Fine Arts, Hinojosa pursued a master’s program but instead enrolled into the University of Southern Louisiana’s Architecture school.

Using the left side of his brain to compensate for the lessor exercised analytical opposite, Hinojosa persevered through the five years of the critical curriculum demanded by the university’s architectural studies. He completed his professional degree receiving its highest award, the Alpha Rho Chi. For the last forty years, Hinojosa has had the fortuitous privilege to have worked with some of the best firms in the state of Texas. Hinojosa also received the national distinction of “Fellow” as bestowed by the American Institute of Architects with the acronym title attachment of “FAIA”.

“Working as an Architect has been the mainstay of my business practice but drawing and painting has continued to be my pastime passion.”

Although Hinojosa’s successful career has been fulfilling and has allowed him to pursue facets of architectural and cultural preservation, his love for art and painting have remained at the forefront, and an important part of his life. Since the early 1990’s, Hinojosa’s art has received national recognition and has been featured on publications including Beckett Sports Magazine, various printed publications and literature, local murals, and museums.

Over the last decade, Hinojosa has successfully fulfilled a lifelong dream of completing his first novel. ‘Rode Hard: The Rise and Fall of a Jockey Legend’ is a biography written about local horse jockey legend, and lifelong friend, Herberto Hinojosa. The novel received critical acclaim and is wonderfully illustrated by Hinojosa.

Hinojosa alongside his wife, Norma and brother Rick co-owned Doubleday’s Bar of Champions and Museum in Port Isabel. The museum exhibits the largest sports memorabilia collection in Texas, with a curated collection of paintings by Hinojosa and autographed work collected over a lifetime.